Many composers write their pieces as solutions to problems or questions they pose for themselves, and I’m no exception. Nearly every piece I’ve written has been an attempt at approaching some sort of dilemma I’ve conjured up from who knows where. The problem (or question) could be a kind of formal shape, a rhythmic pattern, a harmonic idea… you name it. My fifth string quartet, Outside the Eyes, written for the Third Angle New Music Ensemble, will encompass a number of ideas, questions, and challenges I’ve put forward for myself, some of which I’ve been carrying around for many years and a few I’ve developed especially for this occasion.

Every composer’s method for starting a piece is different. I sometimes begin by picking a series of numbers, and in this case this is exactly how I came up with the opening chord. This chord uses four pitches that can be represented by the numbers 1, 2, 3, and 5 (more on this below). This chord, its pitches, and the intervals between them formed the basic elements I used to construct and develop the material.

Tempo is one of the fundamental governing forces of music. It gives us the pulse that allows us to perceive,  interpret, and measure musical time. When a tempo is given it’s usually assigned to a specific rhythmic value, such as a quarter note or a half note. Thus, when we notate rhythm we are able to group and subdivide against a designated duration. The eighth note is half the notated duration of the quarter note and is therefore twice as fast, the half note is twice as long as the quarter, and so on.

Fortunately, we’re not limited any singular notated duration to the represent the pulse; we can represent the pulse with any rhythmic value. Indeed, we’re just as free to assign the tempo to the quarter note as we are the eighth note. Creative licence, I suppose.  Because of this the notated metrical structure can lead to apparent contradictions between what we see on the page and what we hear in the air. This can be illustrated by the following example.

Two musicians (A and B respectively) have two different rhythmic parts. Both musicians have 2 bars of 4/4, both with the same tempo assigned to the same rhythmic value. Musician A’s part consists of four quarter notes per bar with an accent on beats 1 and 3. Musician B’s part consists of two half-notes per bar with an accent on beat 1 of each measure.

If we were to slowly accelerate the tempo to twice the original speed, B’s part will sound exactly the same as A’s prior to the acceleration.

As you can hear, Musician B’s part is now identical to Musician A’s (prior to the acceleration). While A’s part is now twice as fast as it originally was, the effect, given the placement of accents and the 2:1 ratio of rhythmic values, is that the original part sounds like a subdivided rhythm against a “new” pulse. This leads us to perceive the rhythms as if we were back to where we originally started.

If we wanted to notate both parts to represent this effect, it would look like this: 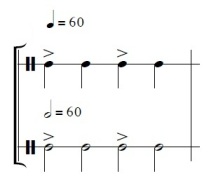 Both parts are notated completely differently, yet sound exactly the same. This is a phenomenon I’ve sought to utilize in this piece.

In 1960 Howard Hanson published Harmonic Materials of Modern Music. This text would lay the foundation for a modern musical analytic method known as Pitch Class Set Theory. One of the cornerstones of this method is its use of integer notation. Integer notation replaces each note of the chromatic scale with a number, beginning on ‘C.’ ‘C’ is known as 0, ‘C#’ is 1, ‘D’ is 2, and so on circling all the way back around to ‘C.’ This gives us 0 – 11 as the integers used to represent all pitches in all octaves.

One of the perks of this method is its ability to categorize both atonal and tonal frameworks. The intervallic principles of Pitch Class (Pc) Analysis are similar to how we approach learning scales. When we first learn about the major scale, we learn that it’s comprised of a series of half steps and whole steps. The ordering of steps for the major scale (ascending) is whole, whole, half, whole, whole, whole, half (2,2,1,2,2,2,1). This is true for all major scales in all keys. In Pc Analysis, the major scale is represented with a singular prime form. Prime form, simply put, is the common framework for a collection of pitch class sets with the same number of elements (pitches) and intevallic content put in their simplest form. It’s basically another level of abstraction similar to how we think of all major scales as a pattern of whole and half steps, only represented with numbers.

One aspect I wanted to connect isomorphically with pitch was meter. Meter is characterized by the number of beats it contains. A meter of 3/4, for example, indicates 3 beats per measure assigned to the quarter note. To bring together meter and pitch, I took the numbers from the opening chord ([1,2,3,5]) and treated them as a ratio of beat groupings to build a variety of different meters. This ratio would determine for each performer the number of beats per measure (or within a grouping of measures) for their part in relation to each other part.  Before I explain how I came up with the meters though, I should briefly explain the form.

I’ve put a lot of thought into how I could potentially create relationships within the material. So much so, that as I writing I slowly became aware of how much control I was trying to exert over the piece. Some of the techniques I’ve used have their roots in a compositional method called serialism. This method gives the composer an incredible amount of control over how the material is created. In “total” serialism every parameter (pitch, meter, timbre, rhythm, etc.) is determined by a collection (or collections) of elements (usually numerical values) arranged in rows or “aggregates.” These rows are constantly varied throughout the piece; so much so that when listening it’s often difficult to pick out any central idea as the “theme.” Constant variation is the name of the game. I’m not a serialist though, and there are quite a few moments in the piece where the material deviates away from the otherwise rigid factors that would have tried to control it. I wasn’t comfortable feeling like a control freak, so I decided to counter this by giving the freedom to construct the final version the piece to the performers. To do this, I designed a kind of aleatoric or chance-driven form to give them this freedom.

Each performer is given a set of four parts to chose from (I, II, III, or IV), and each part utilizes a different meter and notation. So, in effect, the piece can be realized in a number of different ways, and depending on which parts the performers chose the major points of arrival can take on different meanings. Each part is very different in how it’s notated and how many beats per measure are present. A consequence of this is that there is no single score to represent the piece.

As I mentioned above, each meter is related to each other by a ratio of beat groupings. In part I, the meter has 4 beats, in part II the meter has 8 beats, part III has a grouping of three, four-beat measures that combine for a total of 12 beats, and in part IV there two, ten-beat measures that combine for a total of 20 beats. These beat groupings form a ratio of 4:8:12:20, which when divided by 4 reduces to 1:2:3:5 (the opening chord). Thus, meter in my piece acts as a kind of structural counterpoint to the material it’s derived from, rather than as an independent organizing force.

All of this is to say that none of it means a thing when it comes to the actual experience of the sound.

The ideas I’ve been discussing were implemented under the premise that the process of the composer is secondary to the listener’s experience of the work. The title itself refers to the idea that musical sound is completely independent of how it’s represented in notation. If, in the right context, the eighth note can sound exactly as long as the quarter note, then which notation is the “correct” representation of that duration?

2 replies on “On My Fifth String Quartet”

[…] If you want to know more about the mechanics, theory, and philosophy behind this piece, check out my previous post “On My Fifth String Quartet.“ […]

[…] and once it’s finished I will write an extended entry discussing its logic and philosophy, similar to what I did for my fifth string quartet. Thus far 3 of the projected 5 movements are finished with a 4th well under way and the 5th only […]